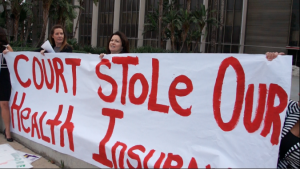 In a temporary settlement of a dispute that led employees to picket in front of the county courthouse last year, about 100 court reporters will get $2,300 each to help cover a huge jump in their health care costs.

But the payments aren’t a permanent fix, and talks will restart in September between the reporters’ union and court officials. Court reporters transcribe every hearing and trial.

The dispute started in 2012, when the court cut the reporters from 40 hours a week to 35 and deemed them part-time employees. That meant a 12.5 percent pay cut and a spike in health care premiums that took effect last year. One veteran reporter, Debi Pinkham, said her monthly payments went from $400 to $1,200.

The increase was so dramatic because the court pays 75 percent of health care premiums for full-time employees, but only half as much – 37.5 percent – for part-time workers.

In December, the court and the union representing reporters agreed to split a one-time health-insurance subsidy for reporters of $2,316 a person.

That will cost the court and the union, the Orange County Employees Association, about $115,000 apiece.

State funding for Orange County courts in the most recent year was $13 million less than it had been two years prior. The court used $19 million in reserve funds to cover a revenue shortage in its 2013-14 budget.

But next year’s revenue is expected to fall $40 million short of planned expenses, and court officials have said state rules will prevent them from using reserve money to cover that gap.

During their lunch breaks in November, court reporters stood outside the Central Justice Center in Santa Ana holding banners and signs with messages including “Restore my full-time benefits” and “Superior Court of Wal-Mart.”

As they stood with protest signs, reporters said they understood the need for shared sacrifice at a time of budget cuts. They wouldn’t have complained if everyone took furlough days or had to share a similar increase in health care costs. But they said they were singled out, perhaps because of a perception they made too much money.

An experienced reporter could earn $78,000 to $93,000 a year before the cuts, one said. Reporters said they’ve earned those salaries through state qualifications and years of experience.

At the time, Muir compared the court’s move to corporations making workers part time to get out of paying benefits.

She contrasted the treatment of the reporters with that of the judges who are ultimately their bosses. Judges, who make more than $178,000, pay nothing toward their own health care.

Meanwhile, reporters said the changes forced them to cancel vacations or take out loans to send kids to college. One reporter said her take-home pay went down $21,000 a year.

To Eliminate Tenure or Not to Eliminate?
Scroll to top